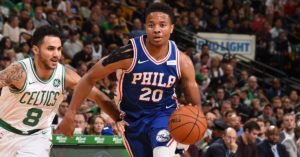 Here’s a cautionary tale about an NBA player’s injury that illustrates a common mistake made in personal injury claims.

Markelle Fultz was the FIRST pick in the NBA draft in 2017.  The Philadelphia 76ers traded other picks and their subsequent year’s first round pick just to snag this 6’ 4’’,  19-year-old physical specimen with a beautiful jump shot.

But something happened to his beautiful jump shot once he joined the team.  He started experiencing a pain in his shoulder where he had difficulty lifting his arm above his shoulder.  He tried playing through this pain throughout his first year and basically was reduced to little or no playing time, which is not normal for a basketball player chosen with the first pick in a draft.  (For the long story, read this article on The Ringer: The Markelle Fultz Mystery.)

By October 2018, after almost a year in the NBA, Fultz finally saw a doctor who diagnosed him with Neurogenic Thoracic Outlet Syndrome. This is a condition where the collarbone and the top rib compress all the nerves and blood vessels between them, which can cause numbness and/or muscle weakness in the hand.

For the 12 months before this diagnosis, the 76ers (and the rest of the NBA and the talking heads on ESPN) thought that Fultz simply had a terrible case of the “yips”.  They essentially thought his terrible shooting was caused by a mental issue.  They chalked him up to being one of the worst draft busts in NBA history due to his mental makeup, not because of a physical injury.  I propose that if Fultz had seen a specialist sooner, his reputation and his value to the team and other NBA teams would have been saved.  Instead, everyone just said that he was just making up the injury and that he was a bust.

You might say, “Michael, we know that you love the NBA, and that you were a passionate but terrible basketball player at a high school that churned out Chris Webber and Shane Battier to the NBA, but what does this have to do with personal injuries in a car wreck?”  Here’s the point – in a car wreck, a lot of people sustain injuries.  A lot of people say to themselves “Well, it’s not that bad, my neck hurts and my back hurts, and I’ll use some icy heat and take some hot baths and it will be better in a week.” Then they talk to the insurance company, and like Fultz, they downplay what they are feeling. “Oh, I’m a little sore but I’ll be okay.”  Then a week, or two weeks, or a month goes by, and their neck and back, or their wrist or their knee is still sore. Their pain is affecting their everyday living activities like walking, going to the store, unloading the dishwasher, or playing with their children or grandchildren.  Six weeks after the wreck, they finally decide to see a doctor. The doctor gives them a diagnosis and says that more likely than not, the injury is from the wreck.

But if you wait this long, your injury claim is greatly compromised.  The insurance company will offer less money, and if you present your case to a jury, they they may return a lower verdict. Waiting one or two weeks for follow-up care is termed in the insurance industry a “Gap in Treatment”.  The insurance adjuster (or a defense attorney) will ultimately say that like Markelle Fultz, you weren’t really hurt in the wreck and it’s just in your head. They will say that since you didn’t immediately seek follow-up medical treatment, your wreck didn’t cause this pain.  It must be something else.  You are now Markelle Fultz – outsiders are telling you and everyone around you that you’re not really hurt and it’s in your head.

Don’t be like Markelle Fultz.  If you feel pain following a wreck, you need to do something about it.  Seek medical treatment where a trained medical professional can diagnose the issue and give instruction on how to make it better.  Please don’t hesitate to give me a call at 864-485-5555.  I’m happy to speak with you personally and answer any questions you may have.