Posted on March 21, 2019 in Interesting Articles 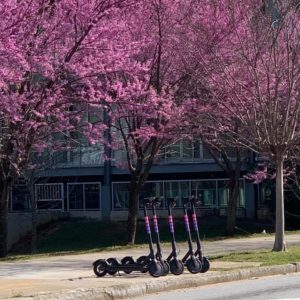 Have you ever taken an electric scooter for a ride? In Atlanta, they’re everywhere. You won’t go very far in Midtown Atlanta without seeing one. They’re touted as a great way to get around traffic-jammed cities like Atlanta and Los Angeles. And they’ve done seemingly well so far.

But as much fun as they look, how safe are they? When cars first hit the roads, there were no seat belts. Over time, it became apparent that cars needed safety equipment like seat belts and airbags to keep people safe on the roads. E-scooters are so new that many people haven’t realized just how dangerous they can be.

Currently, under Georgia law, an electric scooter has the same classification as a moped- it has two wheels, has a less than two horsepower engine, has a maximum speed of 30 mph, and doesn’t require “clutching or shifting” by the driver. Georgia Law states that people operating a moped are granted the same rights and are subject to the same duties as drivers of other vehicles. So basically, the same rules of the road apply to electric scooters as they do to cars and trucks.

Electric scooters are relatively new to Atlanta, but they first hit Southern California streets in 2017. According to a February article in Science Daily, a 2017-2018 study of 249 people treated for scooter injuries at UCLA Medical Center reveals that 40% were head injuries. Fractures accounted for 32% of the scooter injuries, and the remaining 28% were cuts, sprains, or bruises without a head injury. UCLA researchers observed various Los Angeles intersections over a seven-hour period and found that only about 6% of the 193 people they observed were wearing helmets. (Link to article here: https://www.sciencedaily.com/releases/2019/02/190212190854.htm)

Last week, an Atlanta man visiting San Diego died while riding an electric scooter. He sustained massive brain trauma when he hit a tree. He was not wearing a helmet. (Link to article here: https://www.ajc.com/news/local/just-woodstock-man-killed-scooter-accident-san-diego/fz5AFikNOOszRj5zCbYMoN/)

There haven’t been any formal studies in Atlanta yet, but according to a March AJC article, Grady Memorial Hospital receives about 80-100 scooter-related injuries a month. These injuries range from serious head injuries to broken limbs. Atlanta City Council President Felicia Moore says she has decided to implement a new system to track scooter injuries in the city of Atlanta in order to be aware of the number of injuries, but she didn’t say whether it could lead to helmet requirements. (Link to article here: https://www.ajc.com/news/local/how-safe-that-scooter-hospitals-asked-tally-injuries/2hPyds5jB7uFPCcAQYwCpM/)

So, what happens if you get in an e-scooter accident? Well, it works much like other accident types. By law, drivers are required to show reasonable care around electronic scooters, and failure to do so constitutes negligence. So, if you’re riding an e-scooter and a distracted driver follows too closely and hits you, you’d file a claim through that driver’s liability insurance.

As with any accident, if you are hurt on an electric scooter, seek medical treatment immediately. Make sure you get photos of any damage to the scooter as well as where the scooter landed after the accident. Call 911 to report the accident to the police and give accurate details about the accident. If you don’t call the police right away, make sure to file a police report as soon as possible.

Whether you’re a fan of e-scooters or not, they’re likely here to stay.  While cities in South Carolina like Greenville, Columbia, and Charleston have banned e-scooters for now, the shared micromobility movement is growing quickly. It will be interesting to see how it all plays out from a safety standpoint. Until then, please be careful on the roads, WEAR YOUR HELMET, and give us a call if you’ve been hurt or injured in a scooter accident and need an attorney to guide you through the legal process.