RULES OF THE ROAD: FAILING TO YIELD THE RIGHT-OF-WAY 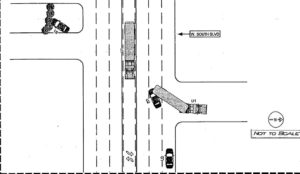 Our personal injury law firm often represents clients who have been injured by other drivers turning left in front of them. The legal term for this is called “failing to yield the right-of-way” on the roadway. Making a left-hand turn in an intersection is more dangerous and results in more collisions than most other turns. There are several reasons for this. Perhaps the left turning driver was in a hurry and simply wanted to get through the intersection. He or she could have misjudged the speed of the oncoming vehicle or not been paying attention. This driver may claim that he or she did not see the oncoming vehicle. Left turns are very dangerous to drivers in oncoming traffic because those drivers know they have the right of way. They expect that the driver ahead of them will yield the right of way and will not pull out and turn in front of them.

South Carolina has clear rules that designate which driver has the right-of-way. These rules are intended to keep people from suffering injury, potential permanent impairment, or even death due to another driver’s negligence. Let’s take a look at what the South Carolina laws and driver rules say about the precautions a driver needs to take when turning left across oncoming lanes:

The driver of a vehicle intending to turn to the left within an intersection or into an alley, private road or driveway shall yield the right‑of‑way to any vehicle approaching from the opposite direction which is within the intersection or so close thereto as to constitute an immediate hazard.

The South Carolina Driver’s License Manual, states at pages 87-88, under the section entitled “Yielding Right of Way” at paragraphs 3 and 4:

Defense attorneys and even insurance companies will try to find excuses for the negligent left turning driver, but South Carolina law is clear about who has the right-of-way in this situation. Greenville Personal Injury Attorneys, such as The Melonakos Law Firm, are experienced and knowledgeable and will know how to apply these laws to win your case.

Watch this video for a case we currently have, where the tractor-trailer company and its attorneys are saying that our client is at fault for the wreck even though the tractor-trailer turned left across three lanes in front of us and we swerved to avoid the collision.

You can’t see the actual wreck because the security footage timed out, but you can see how close our client was from the oncoming lane before the tractor-trailer driver turned left across him. Our client sustained facial fractures which required surgery, and he still has symptoms from a traumatic injury he sustained in the wreck. Nonetheless, the defense attorneys for the tractor-trailer company still say that OUR client is at fault for not slowing down earlier and avoiding a tractor-trailer blocking all lanes of traffic when it failed to yield.

We have another case where the defendant driver received a ticket for failing to yield when turning left at an intersection, and he and his insurance defense attorneys still blame our client. They say that he must have been speeding because the defendant “did not see the plaintiff” before the collision occurred. These are the bogus defenses that insurance companies and their attorneys will bring up in order to save money and try to deny proper compensation to the people injured by these negligent drivers.

These are the common defenses that insurance companies and their attorneys will try to use against you to deny or reduce your compensation:

In short, negligent drivers who fail to yield to oncoming traffic pose huge risks to the law-abiding public, and these types of wrecks cause many serious, and sometimes fatal, injuries.  If you or someone you know is involved in one of these wrecks please do not hesitate to call or e-mail us so that we can help you.  Even if you do not want to work with The Melonakos Law firm for your personal injury claim, you should have legal counsel fighting for you in these situations.